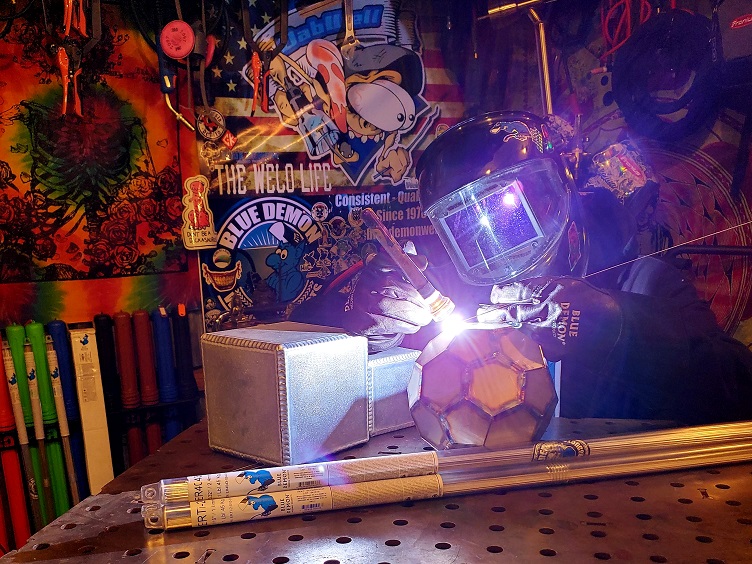 Sean Flottmann, or @dabswellington, as most of you know him, took a moment to talk about his career and rise in social media, as well as share some advice for those who aspire to be like him. Flottmann first got into making welded art early in his career, creating small gifts such as figurines for friends and family. His first project was a replica of a drum set complete with cymbals, threaded hi-hat and a figure with hair made of gas metal arc welding wire.

Flottmann has gone on to create some of the most shared and impressive gas tungsten arc welding (GTAW) art on social media today. Hoping one day he can have the opportunity to make a massive center-stage piece for the band 311, Flottmann says, “I can see it displayed, center-stage with laser lights beaming off it.”

Aside from his stunning GTAW art you see featured in most of his posts, Flottmann works full time as a GTAW welder at Stork Fabricators, Washington, Missouri. Dabswellington is a real human with a real job, just like the rest of us, with the same struggles we all have balancing work, family, being a father and making time to do what he loves. As a true role model, he shows us all that if you have a passion and a desire to do something, you can always find the time. Flottmann creates some of the most shared and impressive GTAW art on social media today and doesn’t plan on letting his GTAW skills be his only claim to fame. He has plans to keep learning and expanding his craft and is looking to enroll in metal shaping and bead rolling classes. He finds inspiration in the works of the master Bead Roller and Metal Artist Jamey Jordan.

Where does the @dabswellington tag come from?

Flottmann is the best of the best: a powerhouse welder and a social media influencer. But where did the name “Dabswellington” come from? I had to ask. “It plays on several factors. The initial play on words is obvious: Dab. I have a very pronounced bead and a typically spaced-out weld profile. My first social media incarnation was ‘311dabwell’ or something along those lines. I was thinking along the lines of ‘Dabwell and prosper,’ a nerdy Star Trek nod. But it was too clunky and didn’t stand out. Out of sheer silliness, I started toying with Dabswell, and it just slowly mutated into Dabswellington. Silly, sounds vaguely proper and rolls right off the tongue,” said Flottmann. Aside from his stunning GTAW art you see featured in most of his posts, Flottmann works full time as a GTAW welder at Stork Fabricators. The number of people with hopes of seeing the same social media success as Flottmann can only hope to be lucky enough to land on such a perfectly rad handle. Many of his followers wonder, how does someone even get to 100,000 followers in the welding world, and gain the support of significant sponsorships from companies like Fronius and Blue Demon? If you look around fabricators and welders with that sort of clout, they are few and far between. This is the ultimate aspiration for many up-and- coming fabricators, welders and metal artists.

How to be successful on social media

Flottmann shared some advice for making it big on social media. “Create content that you legitimately love. A fake is easy to spot. I never thought I would have more than a handful of followers, and I surely never expected to be sponsored. I try to produce genuine content and let my goofy personality shine. Do it for yourself and your craft. If your content resonates with a crowd, that’s just the icing on the cake. The exact thing that bred my skill is the secret to all my success. Tenacity, determination and perseverance are my greatest tools in welding and in life. I’m not talented; I'm not gifted. I’m relentless. If you want to get good at anything, just do a lot of it.”

An inspiration to others

During my travels on the road, I saw firsthand the impact Flottmann is having on the younger generation of welders. I regularly encounter welding students who ask me if I know “Dabs.” Have you heard of “Dabs”? Can you weld like “Dabs”?

Flottmann’s art and success is an inspiration for many up-and-coming fabricators, welders and metal artists.When Flottmann agreed to do this interview with me, I thought it was important to convey the immense impact he’s having on the younger generation of welders. They love seeing his posts, and instructors often tell me the students love to mimic in class how he walks or floats the cup for different manipulation patterns. It is truly fantastic that students today have a role model such as Flottmann who is just a quick click away. I cannot imagine the motivation I would have had as a welding student with the resources of today at my fingertips during my early years learning to weld. His role is so important in today’s climate where there are so many who bash the trades. It is refreshing to see how he always remains positive and is clearly having a blast every step of the way.

“I hope people can take away that your welding career isn't doomed to be solely one-dimensional. You can make your bread and butter all day, and still fill your creative needs in the interim,” he explained. “I also want that people take note of the positive nature at which I try to conduct myself. So many people fall into a negative headspace and view everything through a judgmental lens. I’m all for constructive criticism, but it takes some tact and nuance to not come off as a know-it-all or outright jerk. I try to focus on the positives.”

Flottmann has a real appreciation for teaching and sharing his knowledge of welding with anyone who is interested in learning. In the years to come, he looks forward to doing more live demos and working with students.

His message to those just starting

“Embrace your frustration. Many of the difficult things you do daily are taken for granted just because you are so used to doing them. With enough practice, welding can easily become the same. You need to dedicate yourself to the process and trust that all will shake itself out in due time.”

This article was written by Stephanie Hoffman-Wedding, program manager of workforce development, AWS Foundation, for the American Welding Society.